Whether you are requesting a quote for a project or employment with us, we look forward to connecting with you!

A demand for services continues to grow

A chance meeting with a nearby business owner gave Emerald Site Services a leg up on buying a bigger location to move into at 9190 Jackson Road in Sacramento County.

With residential construction soaring across the Sacramento region, Emerald Site Services needed a more central location to provide its erosion control and other services.

But CEO Austin Edwards said the search was proving fruitless until the owner of a neighboring business on Kent Street in Elk Grove mentioned he’d just put another property on the market.

“We transacted the deal over a handshake,” said Edwards, whose company moved to its new home late last year at 9190 Jackson Road in unincorporated Sacramento County.

Records show Edwards bought the 4-acre property last summer for $2.905 million from members of the Adkins family. Adkins Family Vineyards had only recently opened a tasting room near Emerald Site Services in Elk Grove when both Jeff Adkins and Edwards attended a luncheon last year.

“Austin started talking about my building and that he could use a bigger space,” Adkins said in an email. “I said to Austin, ‘we just decided to put it on the market five minutes ago.'”

Both companies happened to have the same broker, Paul Frank of PDF Commercial in Sacramento. Over some Adkins Family wine, Adkins said, the deal was done.

That capped a long, frustrating search for a place Emerald Site could move into, Edwards said, with both more room and a more central location the top goals. The property at 9190 Jackson has both 18,000 square feet of warehouse and 5,000 square feet of office space, the latter another highlight for Edwards’ company.

“Maybe the property was available, but it had been converted to a cannabis use,” he said, describing what he encountered on tours, when there was a property to tour at all. “Not many have the combination of warehouse and yard we need.”

Emerald Site Services, which provides hydro seeding and other services in addition to erosion control, has between 75 and 100 employees, Edwards said. If demand for services continues to grow, so will those numbers, he added.

Got stormwater problems? Hire some help. Working with a qualified company will have you happily singin’ in the rain. 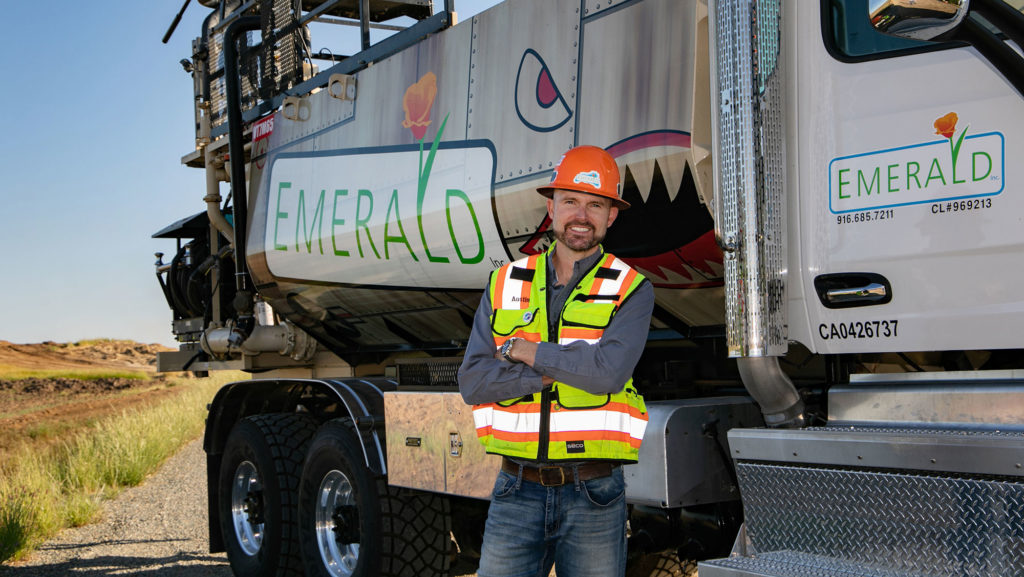 Stormwater compliance. For anyone developing large-scale projects in California, it’s the gift that keeps on giving.

This permit requirement has been in place for years, and its extension will continue to have far-reaching implications. It affects a variety of construction activity from clearing and grading to excavation, and requires a stormwater pollution prevention plan (SWPPP) to be developed by a certified Qualified SWPPP Developer (QSD).

It’s a tricky time to figure out how to get a permit or comply with the requirements to keep one. The pandemic has hit many businesses, and those that have QSDs on staff are seeing hits to productivity when their employees fall ill or have symptoms and can’t go to work.

With a proven track record and expert stormwater consultants on staff, a company like Emerald Site Services is going to make a trusted, reliable partner for developers and contractors during this challenging time.

Here are three reasons to choose a team of stormwater professionals as you prepare to obtain the Construction Stormwater General Permit or work on requirements to comply with it.

On top of all the other permits, requirements and labor needed to complete a project, stormwater compliance is a tough to-do. Rather than worry about how to make it happen, outsource the task to a team that is equipped to take care of it for you and has the manpower to back it up.